Looking back on: The Steal

Every now and then, a band comes along, playing music completely against the grain of what’s ‘popular’ – and blows people away. In 2005, that band was The Steal. Under four years later, it was over, but as bass player Dave House explained, this was always going to be the case. 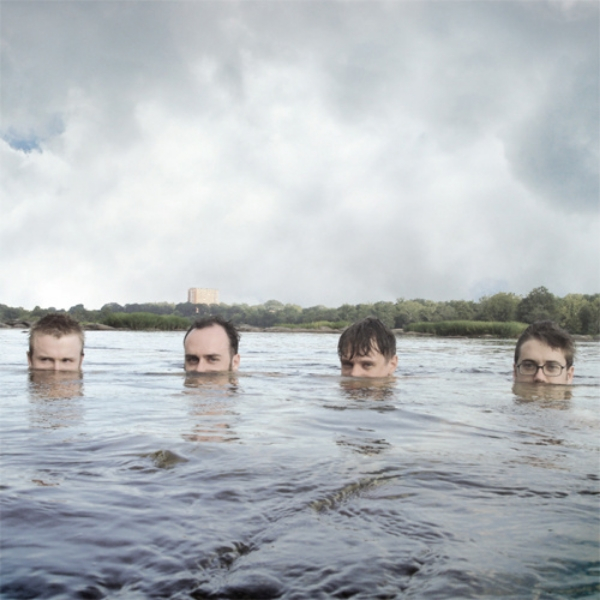 “In late 2005, I was playing a solo show at Notting Hill Arts Centre and Rich [Phoenix – drummer] came along to catch one of the other bands playing,” Dave recalled. “We’d known each other from when Lindsay [Corstorphine – guitarist] and I were in Clingfilm in the late 90s / early 2000 – he was in Captain Everything! and we had played a few shows together.

“He mentioned that he’d just left CE! and his homemade Kid Dynamite hoody forced me to recall a conversation I’d had with Lindsay about “doing a hardcore band”. I seem to remember ‘selling in’ the idea to him fairly easily – a) No long term touring, b) No industry agenda — only fun, c) Two-year expiry and d) We will play fast music that nobody will like, so therefore a), b) and c) won’t be a problem.”

After hearing Dave’s four-point plan, Rich was in – so the three of them went away and started writing songs on their own, while looking for someone to front the band. “I helped record a demo for a local band called 10 Second Break and one of the tracks made me and Lindsay think, ‘Ah, “classic hardcore voice”’,” Dave continued. “So we got [Mark] Pavey to come along to a practice. We’d all learnt the songs each of us had been writing and recording at home, so we pretty much played all the songs perfectly from the first click in. I believe we recorded a demo of World Wide World that ended up online the same day.

“It was certainly one of the most creative and fun afternoons in my musical history. We had six or seven songs down after our first practice, all of which are on the S/T album which we recorded two months later.”

Their decision to play the kind of music they became known for was for refreshingly stubborn and selfish reasons. The cliché of bands wanting to play music just for them and no one else is often transparent and, quite frankly, a lie – but The Steal really meant it.

“Apart from intentionally trying to stifle our potential popularity, I think we really wanted to get back to a time in our own personal histories where we felt most alive,” Dave explained. “It had to represent a time where hardcore / punk had spirit we associated with it – in my opinion 2005 was one of the worst times in music. It was the height of fashion metal and the aesthetic led everything. We wanted to look like a bunch of un-cool uncles but play faster and harder than anyone else.

“At this time we would constantly watch Fugazi – ‘Instrument’ (I don’t think we’d have even started the band without this existing), Bouncing Souls – ‘Do you remember?’ and Kid Dynamite – ‘Five years in one gulp’ DVDs. I seem to remember me and Lindsay being slightly obsessed with a Minor Threat – ‘Flipside’ video fanzine performance. Just like “getting a Rachel” haircut in the 90s, we watched that video and (in our heads) said “I want that one”.”

When it comes to songwriting, each band uses a slightly different method. But The Steal had a process of crafting tunes which was particularly unique – writing songs individually and sending them to each other so that, by the time they got together, the songs were pretty much complete.

“As we all wrote songs, we found the best method was to bring well-formed ideas to practice,” Dave said. “The classic – “Let’s write a song now” thing a lot of bands do was a waste of time to us.”

He stated that the band’s sophomore, and final, album solely relied on this process: “When we booked the studio to record ‘Bright Grey’, we had one song written and only two practices booked before the session. It still surprises me that we were able to pull this off. We had nothing.”

One of the labels the band was given was ‘positive hardcore’ – which was due to both the upbeat music and the lyrical content. Dave said: “At the start, we intentionally looked at ‘traditional’ hardcore subjects: community, making a change (blah blah), but I think as time went on we had a much more personal approach. We definitely wanted to be a positive force, although on reflection, I think the speed we wrote songs led to a few too many cheesy anthems.”

While The Steal were pigeonholed into a certain sub-genre, the band’s two albums were actually very different musically; their debut being buoyant and fun and the follow up more angst-ridden and fragmented.

“If S/T is the sound of naive enthusiasm, Bright Grey is the sound of worn down pessimism,” Dave explained. “Our shared ideology had evolved in different directions, if anything from the unexpected (relative) success of the first record. We were constantly being asked to do things that were always a step in the direction of our previous musical endeavours. We all knew, at a certain point, that we could have been a ‘full time’ touring band, but we were constantly fighting these urges in order to keep the integrity of what we set out to do in the first place.

“This tension is all over Bright Grey, the recording experience ran the full spectrum of human emotion…pure misery to overwhelming jubilation. For me, that’s why it’s such a good record – S/T was us trying to be something, Bright Grey is just us.”

When being in a band, there are always a few downsides that go some way to offsetting the highs experienced through its lifespan. What many fail to mention, or even notice, is the emotional pressures of collectively working on something – pouring your heart and soul into a project – and then spending a great deal of time together in the aftermath. This is a topic which is close to Dave’s heart: “When talking about the hardest part of being in a band, we could all go on for hours about sleeping wherever we could, living off £2.50 a day etc., but that’s just a given, and a choice of lifestyle. I’m much more concerned about relationships…There is something that exists between band members unlike any other kind of relationship. I’ve spent a lot of time thinking about this over the years. I’m currently writing a piece about this — the crux of the matter being the intensity and collective focus of the group make it very hard to retain the same friendship after that focus has been lost. I still count all these guys as some of my best friends but we very rarely see each other. That for me is that hardest part, and not just with The Steal.”

Of course though, the positives of being in The Steal were by no means few and far between. Dave recalled: “We had some amazing times together – there was a point where everything just seemed to get better and better. The two house shows in Southampton were hands down two of the best shows I’ve ever been to, let alone played. The east coast US tour was a dream come true. The first show we played was at the Church in Philly with Armalite – I will refer to the earlier point about the continuous playback of the Kid Dynamite DVD. We were now on that stage and Dan Yemin was on the side singing along. I just remember thinking, this is fucking insane…”

They also made sure that they did things on their terms – each member had been there before and knew what they didn’t like about being in a band. “One thing we wanted out of touring was to not drive all day and then sit around; Rich had been touring over 200 days a year before this and we were all through with it,” Dave said. “We left houses early and turned up late for shows so we could take in what the journey had to offer. Visiting an abandoned cold war bunker in Essex was definitely the one that stands out.”

“Proper touring was always off the agenda,” he continued. “We were all at transitional point of our life and we could have done as much or as little as we wanted. We just chose not to tour extensively – we had collectively toured the UK around 30 times and were tired of sitting in the same miserable backstage rooms every five weeks. From memory we only did three proper tours – two in the UK one in the US.”

Being the kind of band The Steal were, they often evoke thoughts of community, DIY and family. While, of course, they did partly epitomise these things, their main objectives were missed somewhat. “Ironically, I don’t think we saw ourselves as part of any particular community,” Dave explained. “Nobody really understood us or what we were trying to achieve. Throughout our entire existence, it felt like a constant battle to explain why we did or didn’t want to do something a certain way. Bands would talk to us about “making it” or “the industry” all the time and it got really boring. Kerrang would email us to ask for guestlist for a show and were not used to hearing no. Any self-promotion was off the cards. Anyone who wanted the review the album had to buy a copy — in their defence, NME actually did!

And, close to a decade on from when The Steal were formed, how does Dave see the UK punk scene right now? “It’s important to realise there isn’t a national standard — the UK punk scene is just a collection of good and bad pockets of activity. Some of which share our views, some of which don’t. I think as long as a kid can start a band and have the ability to tour nationally off their own back then the punk scene is healthy and doing its job.”

After reflecting on Dave’s answers, why The Steal decided to call it a day seems plainly obvious. They weren’t looking to ‘make it big’ or reinvent the wheel – they just wanted to enjoy their time as a band. “We exceeded point C, the two-year expiry. Hardcore bands should have two albums and play 25-minute sets. I think we were exceptionally proud of Bright Grey and what we’d achieved as a band. The thought of ruining that outweighed our desire to make another record.”

And on their final gig – at The Peel in Kingston with Paint It Black: “It was so special. I’ve had the poster framed on my wall ever since.”

Since the band disbanded nearly five years ago, each member has been keeping busy, musically. The four members split into two musical endeavours, with Rich and Lindsay forming Sauna Youth and Dave and Pavey starting Pacer. “Both bands were formed just before or shortly after the final Steal show,” Dave said. “The split was entirely amicable, but there were obvious differences in our musical directions. There are certain Sauna Youth songs that, put next to certain Pacer songs, wouldn’t be that different to the sound of Bright Grey.

“Rich has been heavily been involved in creating opportunities for musicians with learning disabilities, something more incredible than any of the above. He wanted to start something and create a community. It worked.”